Corona Virus Status: We are currently operating under strict guidelines to ensure the safety of our staff, customers and suppliers. Please click here to learn more.

Tom’s kitchen were hired to provide the catering for a wedding of 124 people in a beautiful village
near Wisbech in Cambridgeshire in late october 2009.

To begin with the guests had 7 kinds of canapés, most of which can be viewed under the canapés page of this site,
the others were created especially for the wedding party and included:
– cucumber with crispy pancetta and Roquefort
– rice paper roll filled with asian slaw.

The Catering for the main course and dessert were as follows:
– Carvery of braised and roast leg of Pork, and roast sirloin of beef
– Creamed leeks, Roast potatoes, Roast parsnips with parmesan and honey
– Panache of seasonal vegetables
– Pomme puree
– Giant Yorkshire puddings
– Pan Gravy.

Dessert was a Raspberry Cheesecake with bramble compot vanilla cream and lemon biscuit.

The whole event went fantasticaly well as the food and the catering as a whole were a huge success. Since this
Wedding several of the guests have been in contact for future events in the Cambridge area including cooking
lessons and demonstrations for the NSPCC. 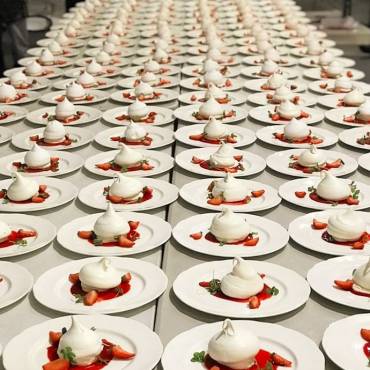